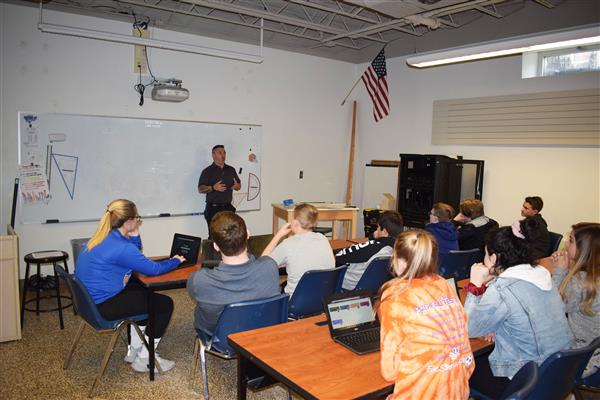 Poland technology teacher Mark Harlander speaks to one of his eighth-grade classes on Friday, April 26, about space and the solar system. Harlander recently organized a project for the entire eighth-grade class for students to work in groups of three using Google Team Drives.

POLAND – As one Poland Central School District student edited a document for a project from home, another worked on a different portion at the same time from that student’s home. The same thing happened from classrooms in different parts of the school building.

This was possible because eighth-graders in the Poland introduction to technology class with teacher Mark Harlander recently used Google Team Drives for a project for the first time.

Harlander said the project will prepare students for working on group projects in college and for careers in which they could be collaborating with people across the globe.

“I think doing something like this will help them,” he said. “It’s where the world’s going now.”

For the project, Harlander set up templates for an outline and slideshow presentation in the Google Team Drives. Students were then randomly assigned to groups of three, and at least one person from each group was from a different class period than the others to make sure work was done electronically.

Students were able to go in and work on the project all through the shared Google Team Drives. Groups did their projects on one of the eight planets or five main dwarf planets in our solar system, and then were able to view the overall combined presentation on the planets and dwarf planets in class.

“They really took to it. They were all pretty much on task with it,” Harlander said. “They were a good group to try this with, and they exceeded my expectations with it.”

Harlander had students fill out a questionnaire at the end of the project, and it showed that students enjoyed it, he said. One concern students shared had to do with communication: wishing they could use a chat feature or have time to meet in school and plan the project. The questionnaire results are important in order to improve upon the project, he said.

Students often used the document commenting feature to get messages to each other about what work to do within the groups.

“It was fun to see the different dynamics,” Harlander said.

This project could be the first step to further collaboration, Harlander said. One idea is to do projects with students from other school districts – locally or even in other states.

“There’s no limit to what they could do,” he said.

Another possibility is doing projects with other classes – especially focused around the Science, Technology, Engineering and Mathematics model, Harlander said. For example, the introduction to technology and science classes could align their energy units to happen at the same time and do a joint project, he said.

“It’s one of the best ways that we could start pushing it really to a STEM model without impeding on what we already do,” he said. “We won’t know unless we try it.”

Poland eighth-grader Logan Cookinham did her project on dwarf planet Haumea with two students from a different class period.

“It was a great project,” she said.

Logan felt like the project helped with team-building and social skills due to the way students had to electronically work together. She also appreciated that the projects combined for one presentation at the end.

“It was nice to see how everyone worked on this from all different classes, and it came together as one thing,” she said.

Poland eighth-grader Seth Walther did his project on planet Mercury with two students from a different class period.

Seth enjoyed learning more about the solar system through the unit and the projects.

“I thought it was cool because I didn’t know there were that many dwarf planets,” he said.

Both Logan and Seth said they liked the idea of doing similar projects through Google Team Drives with other school districts or other classes at Poland. The overlap could help students who are struggling with one of the classes become more interested and learn better, Seth said.

Seth also thinks the introduction to technology class is a good fit for such projects.

“Technology goes with a lot of different classes,” he said.

Seth said it was a team-building project, and he liked that not only each group had to work together but that all the projects were combined at the end for the presentation.

“In this case, it all came together,” he said. 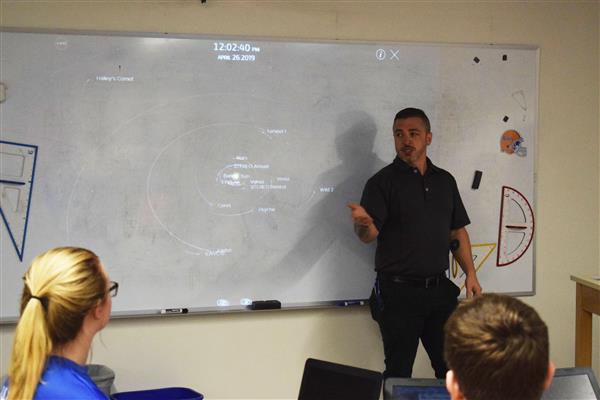 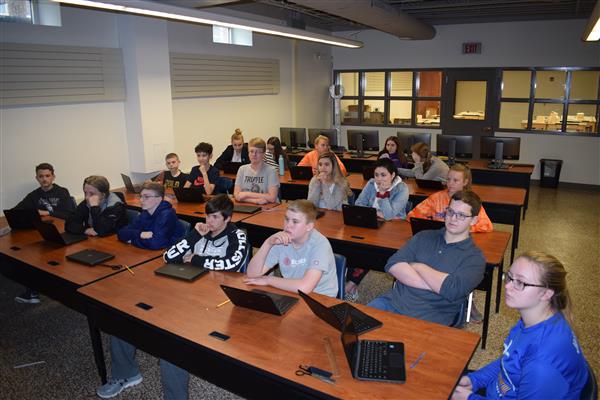