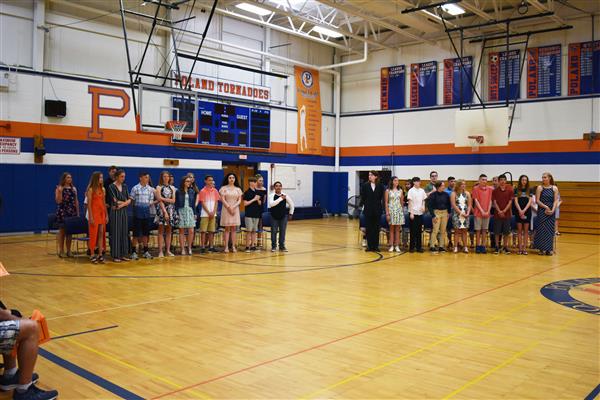 Poland Central School District eighth-graders stand at the beginning of the Grade 8 Moving Up Ceremony on June 24.

POLAND – As Poland Central School District eighth-graders recently participated in the Grade 8 Moving Up Ceremony, Principal Greg Cuthbertson encouraged them to make the most of their time in high school.

The 39 eighth-graders at Poland were recognized during the ceremony on June 24. Cuthbertson spoke to students along with guest speaker Keara Blumenstock, a Poland Class of 2019 graduate and Poland National Honor Society president.

Also as part of the ceremony, students received certificates, a slideshow was shown and Triple C awards were given to students Jerry Almas and Alana Nicotera for showing “courage, commitment and character.”

Cuthbertson said time is the most valuable commodity.

Blumenstock reflected on when she was moving into ninth grade. She encouraged students to participate in “fun” aspects of high school such as sports and clubs, to live life to the fullest and to hold onto their memories.

“Once again, I want to say congratulations and good luck on your next four years of high school,” she said.

Moving Up certificates were awarded to: