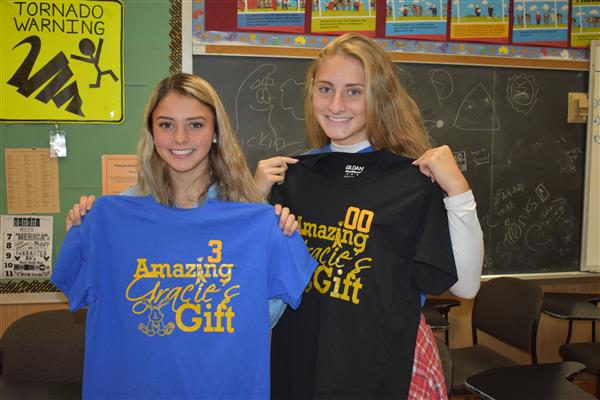 Poland Central School District seniors Riley Wisheart (left) and Leah Basel (right), two of the captains of the girls varsity soccer team, display Amazing Gracie’s Gift Foundation shirts on Monday, Oct. 7. The girls and boys varsity soccer teams will be wearing shirts in support of the foundation during the Poland Booster Club Fall Festival and Columbus Day Soccer Tournament games this weekend. More info about the foundation and merchandise can be found at www.amazinggraciesgift.org.

POLAND – Putting a soccer ball into the net isn’t the only goal the Poland Central School District girls and boys varsity soccer teams will have during the Poland Booster Club Fall Festival and Columbus Day Soccer Tournament this weekend.

The teams support a cause during each year’s tournament, and this year’s focus is the Amazing Gracie’s Gift Foundation, a nonprofit that helps families with young children fighting pediatric cancer or a life threatening illness.

Poland senior Leah Basel, a captain of the girls soccer team, thinks it’s important that the teams get involved with such initiatives.

“Doing the tournament each year, and doing it for different charities each year, shows we care about aspects other than just soccer,” she said. “It makes it more than just a game.”

The Poland Booster Club Fall Festival and Columbus Day Soccer Tournament takes place on Saturday, Oct. 12, and Sunday, Oct. 13, at the Kuyahoora Valley Town Park. All members of the Poland girls and boys varsity soccer teams purchased Amazing Gracie’s Gift Foundation shirts to wear during the soccer tournament, and 200 pre-order shirts were sold to raise funds for the organization. Amazing Gracie’s Gift Foundation shirts and some other merchandise will be on sale during the Saturday games, which take place at noon, 2 p.m. and 4 p.m.

With the soccer teams supporting a cause each Columbus Day Weekend, Poland girls varsity soccer coach and social studies teacher Tom Basel said his wife, Julie, had the idea a couple of years ago that they should organize the charity efforts during their daughter Leah’s senior year.

In particular, they wanted to support someone Julie Basel worked with: West Canada Valley teacher Lisa Lawton and her husband Geoff Lawton. The Lawtons lost their daughter Gracie to cancer, and that inspired them to start the foundation, Tom Basel said.

“It’s such a worthy cause, and it’s something that affects so many people. They’ve already helped 675 families in the region,” he said. “It’s a nonprofit run by very good people who have suffered horrible loss. Julie and I felt like this was the least we could do to get behind their foundation.”

Amazing Gracie’s Gift Foundation strives to provide gifts that will leave lasting memories for families affected by pediatric cancer or other life-threatening illness. The foundation makes monetary donations to assist these families who need financial assistance and continue to support the Ronald McDonald House of Albany, where a room was created in Gracie’s memory.

“They provide family oriented experiences and opportunities to bond and be together on some of their final days and months,” Tom Basel said.

With the soccer teams both wearing the shirts and all the pre-order shirts sold, Tom Basel believes the level support from the Poland community will be quite clear this weekend.

“I expect we’ll have a pretty impressive showing of people,” he said.

Leah Basel mentioned that recent focuses for the Columbus Day Soccer Tournament have included breast cancer, and this year continues the tradition of supporting a worthwhile effort.

“This is something different, and it’s a really important cause,” she said. “It’s nice to see people showing interest and developing community unity.”

Poland senior Riley Wisheart, another captain of the girls varsity soccer team, agreed with Leah Basel’s comments and had a message for the community.

“I think it’s really important,” she said. “Come support it.”