POLAND – The Poland Central School District Kids Against Pollution, Poverty and Prejudice club organized a competition among elementary classes that led to the recycling of 353 pounds of plastic film last week and tied into STEAM lessons.

The goal of the competition was to create positive recycling habits and raise awareness that plastic film such as grocery bags can’t be recycled through curbside recycling programs but can be dropped off in boxes at many grocery stores and other retailers.

Poland sixth-grader Madeline Swanson, 11, said her knowledge about recycling has increased since the Kids Against Pollution, Poverty and Prejudice club, known as KAP, started plastic film recycling initiatives a few years ago.

“It got me to recycle more,” she said. “I’m more aware of it. At home, I tell people not to put the plastic in the garbage and how to recycle it.”

KAP, which is open to students in grades 4-12, organized the competition. Poland special education teacher Sally Leahy and English teacher Michael Gagnon are the co-advisors of the club. The competition also tied into science, technology, engineering, art and mathematics lessons in the classroom of STEAM/keyboarding teacher Beth Lepper.

‘The disappearance of plastic bags’

Poland’s KAP club first became involved in raising awareness about recycling plastic film by participating in the Oneida-Herkimer Solid Waste Authority’s recycling contest in the fall of 2016. KAP also has organized its own contests among Poland grade levels like is being done this year.

There is a new aspect of the recycling efforts this time around involving making people aware that they might want to start developing a habit of bringing reusable bags to stores because a new bag waste reduction law takes effect on March 1 in New York state. The law bans all plastic carryout bags other than some exempt bags from distribution by anyone required to collect New York state sales tax.

Typically, 23 billion plastic bags are used each year in the state, according to the state Department of Environmental Conservation.

Even with reduced grocery bags available, there will remain all kinds of plastic film such as cereal and bread bags that will require special recycling efforts.

Increasing awareness of these changes and the option of recycling plastic film at many retailers and grocery stores is a big reason for the contest, Leahy said.

Gagnon also commented on how KAP hopes the recycling initiative impacts the community.

“The competition aspect adds some excitement, and really encourages a lot of participation; hopefully, we can foster a permanent change in these students' recycling habits that will carry on beyond this one week,” Gagnon said. “Every little bit helps, and as students start to see the disappearance of plastic bags used in stores, and start to realize the importance of this for their future, we can see real change here in our small town.”

Based on results and feedback from previous plastic film recycling competitions at Poland, it was determined that about the same amount was collected over a short period of time as a longer competition and that students preferred a tangible prize such as the reusable water bottles and bags they can win this year, Leahy said.

The prizes also tie in with the themes of the contest, Leahy said.

“Just to keep sharing with them that idea of let’s reuse things,” she said.

This event also allows all students to participate regardless of family economic status or parental support because anyone can bring in materials to be recycled, Leahy said.

In addition to creating improved recycling habits for students and their families, KAP has “absolutely” made Leahy think more about her own recycling habits and take extra steps to recycle more, she said.

At the end of the competition, the Poland custodial crew will be taking all of the plastic film to the Price Chopper in North Utica to be recycled, Leahy said.

The plastic film competition this year connects with lessons students are learning in their classes with Lepper. She teaches science to kindergarten to third grade, STEAM to fourth and fifth grade and keyboarding to sixth grade.

Students in the fourth- and fifth-grade STEAM classes helped weigh the plastic film and track the results during class. KAP members in sixth grade also worked on the weighing and tracking during study halls and advisement. The results were announced each morning to let students know which grade level was in the lead and encourage the other grades to try to catch up.

STEAM students also tried to make predictions about the weight of bags of plastic film and how much would be collected and compared the predictions to the results, Lepper said.

Additionally, they talked about using cloth bags – including how Wegmans in Syracuse has already eliminated plastic bags – and what the recycled materials are used for afterward, Lepper said.

STEAM classes focus on recycling and ocean pollution throughout the school year, and all the STEAM projects involve recycling – such as creating alternatives to the environmentally unfriendly plastic rings that often are used to hold six-packs of soda.

“They couldn’t even get to lunch,” she said.

With the younger students in their science class, conversations are about encouraging them to recycle, and their lessons on the earth and animals also intersect with recycling, Lepper said.

“Because they’re the ones who are going to be where we are now,” she said. “They say that if nothing changes by 2050, there will be more plastic in the ocean than fish.”

When plastic started to spread in use, everyone thought how helpful it was to use, but now we know it is polluting the earth, Lepper said.

“I think it has kind of backfired on us,” she said.

Poland KAP members Madeline Swanson, Ariel Pope, Amber Muller, and Jack Hoffman – all 11-year-old sixth-graders – were among the students to weigh the plastic film through the competition.

Madeline said she thinks the recycling initiative is a great project to get kids to learn to recycle.

“I think the competition makes it fun and makes them want to do it,” she said.

It’s important to recycle, Madeline said, and she hopes the experience of the competition will get students and their families to keep recycling.

“Recycling is really good for the environment, and if you’re not doing it, it’s not good,” she said.

Ariel said her favorite part of the recycling competition is weighing the plastic film.

Ariel said she was surprised to see the amount of plastic film that people brought in. She learned about recycling plastic film through the club and tries to practice those habits because of the importance of recycling.

“Because it’s saving the environment,” she said.

Ariel said she hopes people will continue to recycle plastic film after the competition, and she enjoys being a member of KAP.

“Because it makes me happy being involved,” she said.

Amber said the recycling competition is a good project for KAP to work on.

“It seems like it would be really helping the environment because the majority of ocean life is kind of dying,” she said. “It also is fun because the elementary gets to participate in something.”

“Because the ocean life is kind of the bottom of the food chain, and if they die, we’re all going to end up dying,” she said.

Jack said he enjoyed the competition and tracking the amount of plastic film brought in.

“This school, since it’s so small, I think they’re over-competitive,” he said. “Everybody hates to lose.”

Jack said being a member of KAP taught him about developing good habits for recycling plastic film.

“I try to,” he said. “If we didn’t, then we would just be polluting our oceans and killing animals and killing the earth.”

“Because without them knowing, they might be throwing their plastic film in the trash unbeknownst to them that they could be recycling it,” he said.

Improving recycling and preventing pollution are major parts of the focus for the KAP club.

“Even though a lot of people don’t do it, it’s affecting our climate,” he said. “This is why we’re seeing warmer winters, warmer summers, wetter winters and wetter summers. Climate change is something that impacts everyone every day. People should be aware of how it affects them.” 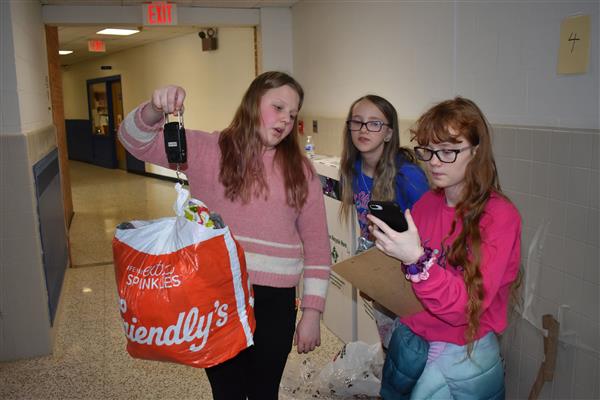 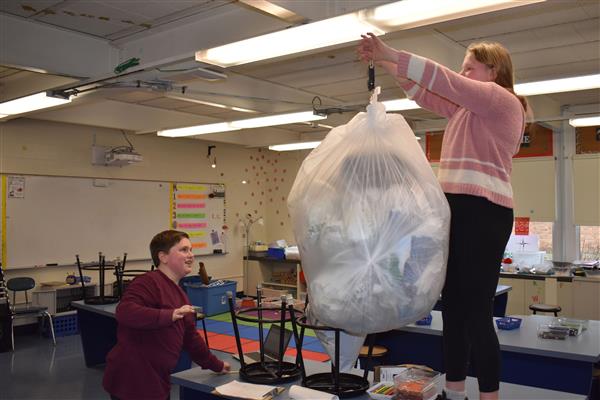 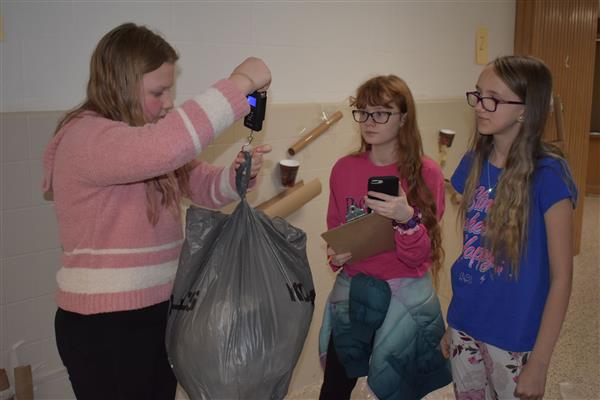