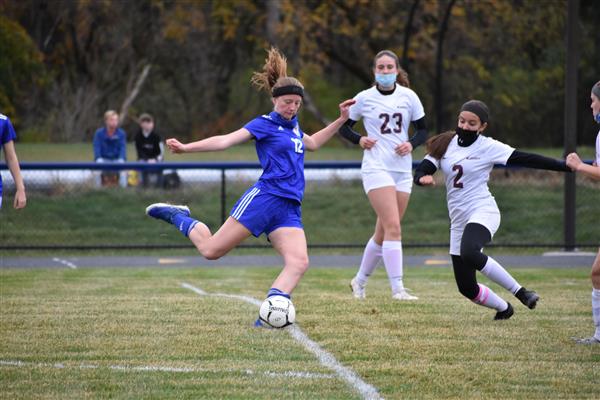 Poland sophomore Logan Cookinham kicks the ball on Friday, Oct. 16, during the first soccer game on the new field installed as part of Capital Project 2020 at Poland Central School District. Cookinham scored a goal and had an assist in Poland’s 4-0 victory against Frankfort-Schuyler.

POLAND –  Poland girls varsity soccer players felt a mixture of anticipation and enthusiasm as they walked onto the new soccer field from Capital Project 2020 on Friday, Oct. 16, for the first game ever played on the field.

“Personally, I think pretty much all of our team loved it,” Poland senior Amanda Sweet said. “We were the first team to actually play on the field, so it was really exciting for us.”

As the $12.1 million Capital Project 2020 nears completion, the new soccer field was available for a game for the first time on Friday, Oct. 16, when the Poland girls varsity soccer team took on Frankfort-Schuyler.

The girls soccer players shifted from feeling nervous to feeling competitive and enjoying the experience, as they took a 1-0 lead over Frankfort-Schuyler into halftime and pulled away in the second half to win 4-0.

“After the game whistle blew, we were really happy to be playing,” Poland senior Erin Powers said.

Poland sophomore Logan Cookinham said she got more comfortable with the excitement of playing on the new field as the game got going.

Poland first-year girls varsity soccer coach Jason Potempa, a Poland physical education teacher, said teams hadn’t even had the opportunity to practice on the field prior to the first game.

“Friday night was the first time anyone has had any type of activity on the field,” Potempa said. “The girls were very excited.”

The game was also senior night for the team, so seniors Sweet, Powers, Sara Borner, Rickelle Wright, Grace Braunlich, Jadyn Lowe and Jessica Batson were honored before the game as well.

Poland junior Lexi Bates scored the first two goals on the new field, and Cookinham and Sweet each added a goal. Powers had two assists, and Cookinham and eighth-grader Lily Martin had the other assists. Batson and sophomore Chloe Roark each had two saves.

‘Happy to be here’

While waiting for the field to be ready through Capital Project 2020 and with the uncertainty about sports this year due to COVID-19, the first game on the new field was especially meaningful for players because seniors not only are getting the chance to have a season, but the timing also worked out for them to play on the new field.

“I’m grateful,” Sweet said. “I know my team is grateful. We’re happy to be here, and if we’re able to play, we want to play.”

Potempa said he and the players are hopeful they will be able to continue and complete the season, including additional games on the new field.

Robert Batson, Poland Board of Education President, Facilities Committee member and parent of girls varsity soccer player Jessica Batson, said it was evident to see how much the first game on the field meant to the students.

“You see the energy in other peoples’ eyes,” Robert Batson said. “I’ve taken a lot of pictures and video of kids through the years. While going through the pictures and video, you focus on the determination and joy in the kids’ eyes. I think COVID’s impact makes players and fans grateful for each game especially to finally be able play on this great new field.”

‘All of the emotions’

Sweet said having the first game on the new field during senior night and continuing the team’s success with a win all means a lot, but she was still focused on the game with a mentality of, “Here we go.”

Powers said she was a little nervous when walking onto the field, but it felt good to be on the field.

Cookinham also had many thoughts going through her mind as the game got underway.

“Obviously, at first, it was very nerve-racking because we’re the first team to play on the field, but we had to shake the nerves off because it’s also exciting too because we’re the first team on the new field, and you never know what it’s going to be like,” Cookinham said. “It’s going to be exciting, nerve-racking – all of the emotions at once.”

Potempa said the whole team was excited about the special first game on the new field.

“The seniors especially because they saw the project begin last year, so they have been hoping and waiting for the opportunity,” Potempa said. “They are also very grateful to be able to use the new field for home games. This is a very different year as far as sports are concerned, so having the new field really provides something exciting to look forward to for our season.” 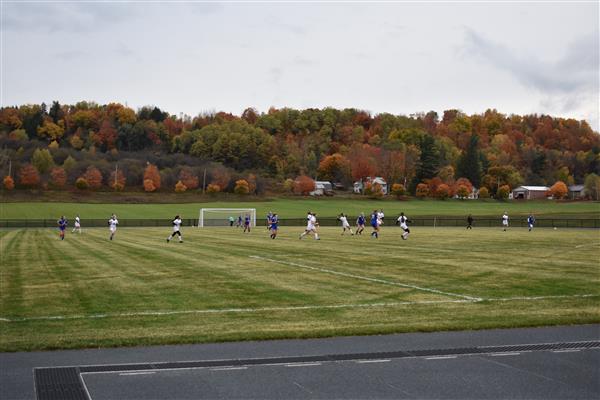 The Poland and Frankfort-Schuyler girls varsity soccer teams competed in the first ever game on the new soccer field installed as part of Capital Project 2020 on Friday, Oct. 16. 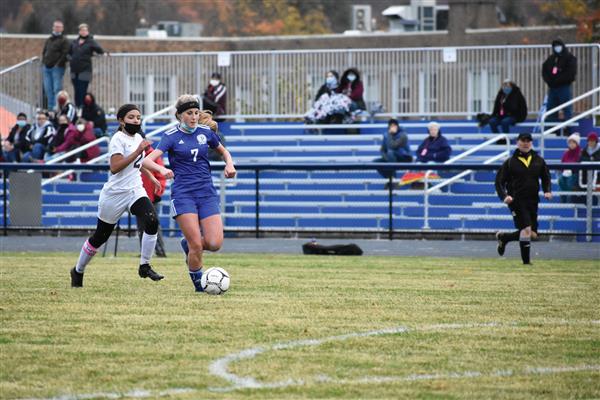 Poland junior Lexi Bates dribbles the ball on Friday, Oct. 16, during the first soccer game on the new field installed as part of Capital Project 2020 at Poland Central School District. Bates scored the first two goals on the new field. 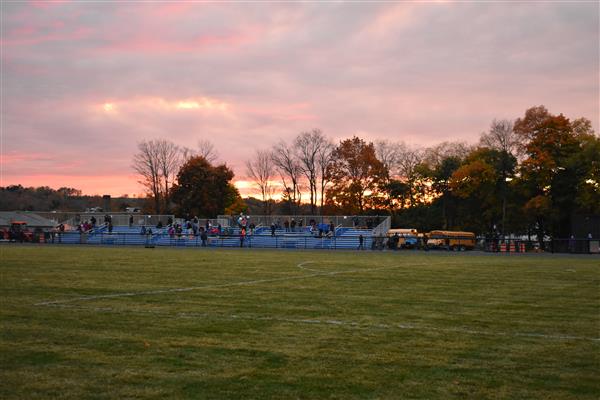 Spectators get up to leave the new bleachers at the conclusion of the first game on the new soccer field from Capital Project 2020 on Friday, Oct. 16, at Poland Central School District.