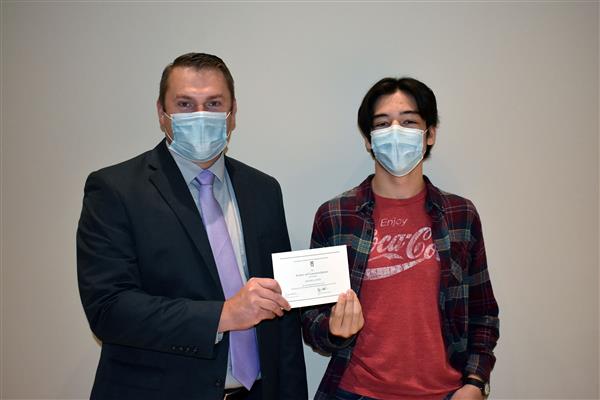 The letter states that Stein’s performance on the October 2019 Preliminary Scholastic Assessment Test/National Merit Scholarship Qualifying Test (PSAT/NMSQT) placed him in the top 50,000 out of more than 1.5 million students who took the test nationwide.

“It’s pretty cool,” Stein said, of receiving the “Letter of Commendation,” “and it was kind of surprising too.”

Stein, 18, said he thought he did pretty well on the test overall – particularly in mathematics, but he wasn’t as sure about the reading part. He ended up with a near perfect score in math and a strong overall score.

Poland Central School District provides the PSAT and SAT at the school each year. The PSAT for Poland juniors is on Thursday, Oct. 29, this year, and the SAT at Poland is scheduled for Wednesday, March 24, 2021.

Poland Principal Greg Cuthbertson said he was proud of Stein for being named a commended student.

“This is the first one in my tenure anyway, and it’s pretty exciting,” Cuthbertson said. “It’s a tribute to him though. He’s put a lot of work in, so this is a tribute to him and the work he has put in academically.”

Stein heard about his achievement when Poland Director of Guidance Janice Watrous, a counselor for middle school and high school, called him down to her office to let him know. That evening, Stein told his mother.

“She was very excited,” Stein said, noting that she also said she was proud of him and that it would be good for college opportunities.

The letter to Stein states that his recognition as a commended student is a credit to him, his family and his high school.

“The degree of success you achieve in the future will depend upon you – your use of abilities and your perseverance toward the goals you set for yourself,” the letter states. “We offer you our best wishes with the hope that being named a commended student in the National Merit Program will broaden your horizons and encourage you to develop your potential to the fullest.”

Watrous said she is very proud of Stein and what he has accomplished.

“He is an extremely bright and well-read young man,” Watrous said. “His mind is particularly impressive in the way in which he absorbs and processes information, how he comprehends at a deeper level and makes connections. In my getting to work with Shayne as his counselor for the last six years, it is simply amazing to see how he sees the relationships in a problem, and how strong his problem-solving skills are, as well as his analytical and reasoning skills.”

Watrous said earning the commended student recognition was a student accomplishment, and Stein has always taken an active, leading role in his education. He is open to new ideas and learning opportunities and is very inquisitive.

“He is always looking to find the meaning, the why, the how and if there is a better way,” Watrous said.

Stein said one factor in why he did well on the PSAT was probably that he was studying similar topics in math at the time of the test. Tests also have always come easy to him, so that helped, he said, but he humbly added again that the results were “a bit surprising.”

“I’m just excited to see what happens next,” he said.

Stein participates in cross country, outdoor track and wrestling at Poland. He has an interest in traveling, and in his spare time, he studies various foreign languages on his cellphone.

After graduating, Stein plans to attend college – possibly on the west coast or in a different country – to study building trades and construction management. His goal is to own a company that purchases houses, conducts upgrades to the houses and flips them for a profit.

In line with his goals, Stein recently applied and was accepted into the Mohawk Valley Community College Young Entrepreneurs Academy for this school year. He filled out an application and a letter of reference and was accepted in early October.

The Young Entrepreneurs Academy will meet once per week for three hours after school from October 2020 to May 2021. The meetings will take place virtually during part of December and January and will be in-person at MVCC facilities before and after that.

In the program, Stein will learn about creating a business plan, startup costs, running a business and more. There also is an opportunity to earn funding from a board of investors.

Stein said he was interested in the program because it connects to his career goal, and it’s a chance to learn business skills he doesn’t have yet.

“So I think it will be really helpful to learn more of those skills,” he said.

Poland has offered the PSAT to 10th-graders and 11th-graders every October for the 20 years Watrous has been at Poland. In the last few years, Poland added opportunities for ninth-graders and 10th-graders to take a practice test in the spring. COVID-19 impacted that last year, and the spring of 2021 is uncertain right now.

All 11th-graders will have the chance to take the PSAT on Thursday, Oct. 29, this year, along with the SAT scheduled for Wednesday, March 24. A plan for 10th-graders is still in development.

“I have felt that it is important for students to become familiar with standardized testing situations and to practice and learn how to take these tests,” Watrous said. “Like playing a sport or an instrument, you need to practice. You need to build up stamina to take a long test, learn how to pace yourself appropriately and manage the timing of the test.”

Watrous said the PSAT and practice testing also helps familiarize students with the format and types of questions. Additionally, the PSAT is the only way to qualify for the National Merit Scholarship Program.

Stein said he appreciates that the testing opportunities are available at Poland.

“I think it’s a really good thing for students to be able to take the SAT and PSAT here,” Stein said, noting that the experience could be more daunting if students had to travel to another location for the test. “It’s more comforting taking it somewhere where you know everybody.”