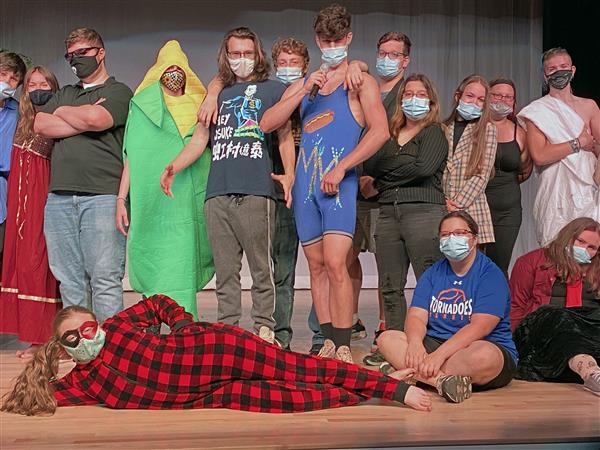 Poland Central School District Drama Club members pose in full costume on Thursday, June 3, in preparation for their return to stage for their first full show since COVID-19 impacted schools more than a year ago. “The Afterschool Special” will also be the first full show on stage in Poland’s renovated school theater. A filmed version of the show will be available for purchase starting next week.

POLAND – The Poland Central School District Drama Club hasn’t been able to put on a full show since before COVID-19 impacted schools more than a year ago, and in the meantime, the renovation of Walker Auditorium into a new school theater was completed as part of Capital Project 2020.

So when Poland students step out onto the new, larger stage this Friday and Saturday for two invitation-only performances and are put in the spotlight by a new lighting system and speak through the new sound system, it will mark a new beginning for the Drama Club.

“It feels in a lot of ways like it’s our first time putting on a show because it’s been so long,” said Michael Gagnon, English teacher and Drama Club co-advisor. “It definitely feels almost like a reboot. It feels like a restart to the program.”

The Poland Drama Club is preparing to debut “The Afterschool Special,” an original show written and planned by students in collaboration with Drama Club co-advisors Gagnon and music teacher Jocelyn Rauch. There will be invitation-only performances on Friday, June 4, and Saturday, June 5, live in the school theater. Drama Club members each have two tickets they can give to family or friends.

Some scenes were pre-filmed and will be shown during the live performances. The live performances will also be recorded and added to the pre-filmed scenes for a complete production that will be available for viewing for $12 through a vendor site starting sometime the week of Monday, June 7, and staying available for purchase for two weeks. Information will be posted at www.polandcs.org.

“The Afterschool Special” is in the style of “Saturday Night Live” sketch comedy framed through a student watching television and changing channels to see various spoofs of content such as “American Ninja Warrior,” “Shark Tank,” wrestling, sitcoms, a political rap debate and even Romeo and Juliet going for a first kiss during the pandemic before realizing they’re wearing face shields and rubber gloves.

“It’s taking all the craziness of the last year and looking at it through a satirical, high-school lens and how teenagers would process all of it,” Gagnon said. “And they would usually process it in a goofy, kind-of-crazy way, which is what this production is.”

To put the pre-filmed parts of the show together, the Drama Club turned to Poland junior Gabrielle Ross, who is in the Visual Communications Media Arts program at Herkimer-Fulton-Hamilton-Otsego BOCES with instructor Melinda Maycock. Ross started about a month ago learning from Maycock more about recording and editing video – skills that the full class didn’t start learning until about a week ago – so she could work on “The Afterschool Special.”

Ross said she supplemented that with watching YouTube videos, searching on Google and getting help from Information Technology staff at Poland.

It has been a complicated, time-consuming process to film and produce sketches, and Ross has put in a huge effort to make it happen, Gagnon said.

“It’s been interesting and fun and a lot of work,” Gagnon said.

Ross said it has been interesting to take on most of the recording and editing while learning how to do it.

“I feel like this is the best way to learn,” she said.

Part of the challenge has been turning around the project in time, but when it’s all done, Ross expects she’ll look back with happiness.

“I’m going to feel very proud because of how little time I had and how little skills I started off with,” she said. “I expect it will be my favorite project I’ve done.”

The end product should be a show that viewers will enjoy, Ross said.

“I think people will say it’s a pretty unique experience,” she said.

‘All hands on deck’

To prepare this show, students and the Drama Club co-advisors threw as many ideas at the wall as they could think of and worked on writing sketches based on them.

“It really has been an all hands on deck kind of thing this year,” Gagnon said.

Poland senior Kayden Lamphere played a particularly large role in the writing process by co-writing much of the production with Gagnon, Rauch and other students.

A large number of underclassmen including ninth-graders have stepped up for this show, junior Ryan Basel learned the new light system and freshman Austin Mercer learned the new sound system. The senior actors for the performance include Izzy Mowers, Bryce Hart, Dean Sellers, Hunter Houghtaling, Jarrett Papp, Chloe Gleed and Kendra Walker. Many others have strong acting parts as well.

There was a long time when nobody knew if the Drama Club would be able to perform on the stage this year or not or how many students would be able to be on stage at once, so it has been great to get on the new stage and use the new sound and light systems, Gagnon said.

Having many improved aspects such as a bigger stage, better microphones and more comfortable seats makes the students feel appreciated, and they’re excited to perform, he said.

Walker, who is acting in multiple sketches and doing some backstage work, said performing in the upgraded school theater will be extra meaningful for her because the Walker Auditorium was named after her mother, Janine Walker, who was Poland’s high school art teacher before she passed away on March 27, 2009.

Due to construction work on the auditorium and COVID-19 requirements, Kendra Walker didn’t think she was going to get a chance to be on the new stage.

“For a while, I was actually sure that I wasn’t going to be able to perform on it,” she said, noting that there were no extracurricular activities at the beginning of the school year. “I was really bummed.”

Now that it’s on the verge of happening, she’s looking forward to the performance.

“It feels pretty good – honestly, for me especially,” Walker said. “It always feels kind of at home on the stage, so I think it will be even better.”

“It’s going to be funny – jokes, random stuff – there’s something there for everyone,” she said. “And if there isn’t, at least it won’t be a waste of an afternoon because it’s still going to be entertaining.”

Having a mix of live performances and recorded sketches plus performing on the new stage and doing the first show since COVID-19 will make for a memorable show, Walker said.

“It’s going to be different,” she said. “I think we’re all just excited.”