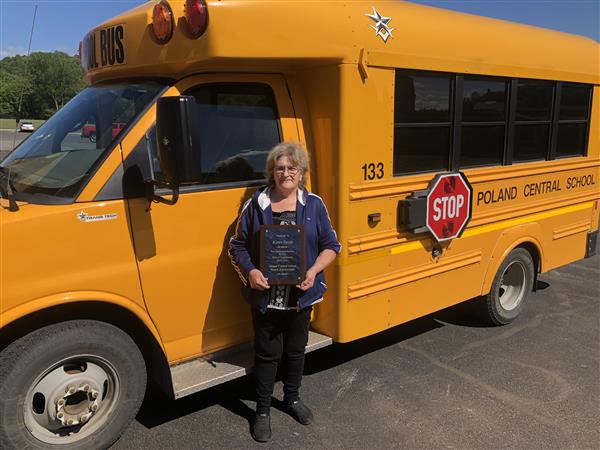 Poland Central School District bus driver Karen Smith holds a plaque she received from the Poland Board of Education for her years of service on her last day of work on May 27. She is retiring after about 20 years as a bus driver for the district.

POLAND – Two Poland Central School District bus drivers who have been with the district for about 20 years each are retiring this school year and are leaving with many fond memories of transporting students to and from school.

“We are so fortunate to have drivers that are dedicated to students and safe transportation,” Poland Superintendent Laura Dutton said. “Collectively, we wish Mrs. Smith and Mr. Miller retirements that bring many happy and fulfilling experiences.”

Both Smith and Miller started their bus-driving careers in Poland in 2001, and they are now retiring in 2021.

Smith began with a bus run for prekindergarten students and then moved to various bus runs for special needs students.

“It was a great experience – getting to know the kids and getting comfortable with them,” Smith said.

When Smith started, she figured it would be a job she would stick with for a long time.

“I just wish I would have started sooner,” she said.

On her last day of work, Smith received a plaque from the Poland Board of Education thanking her for her service.

“That was very nice,” she said. “That was unexpected. I was very happy with that.”

Both retiring bus drivers were also recently honored with a retirement celebration in the bus garage put on by their union.

Shortly after her last day, Smith said she expects to enjoy her retirement.

Her plans include taking daytrips and going fishing.

Smith also is looking forward to enjoying more time with her great grandson, who is about 15 months old.

“He keeps me busy when I watch him,” she said.

Miller’s first day as a bus driver was on Sept. 11, 2001, and he was picking up students in the morning when the World Trade Center terrorist attacks started in New York City.

“That was the first time I drove a bus,” he said. “We didn’t know about it until we got back to the bus garage.”

Miller still remembers the shock of everything going on that day, and of course, he still brought students home from school at the end of the day.

He was a part-time driver and became full-time in January 2002. He had retired from Remington Arms after 28 years, and he and wife were working nights, but he wanted to be able to spend evenings with his daughter, so he became a bus driver.

“It’s a good job for anybody who wants to be able to spend time with their family and doesn’t mind driving around a busload of kids,” he said. “I’m going to miss my other drivers and friends and all the kids, but it’s time.”

Miller said he enjoys the responsibility of transporting students and seeing them grow up. Some of them have been coming up to him and talking to him about his upcoming retirement.

“I have a lot of good memories because of the kids,” he said. “I’ve had the same route for about 15 years. I’ve seen the kids go from PreK to graduation, and now some of their kids are riding the bus. That’s time to retire.”

Miller said recognition for his years of service isn’t what he most cares about.

“I’m just kind of one who does my job,” he said. “I think the kids are more important than any kind of accolade because that’s what you do the job for.”

Bus drivers do have an important role for helping students get to and from school that not everybody might think about, Miller said.

“Even on the worst days, we always bring them home,” he said. “That’s one thing about the job, if you take them to school, no matter what the weather is, you have to take them home.”

“Just enjoying myself and not having to get up early in the morning to drive the bus – especially in the winter,” he said. “I’m looking forward to it.” 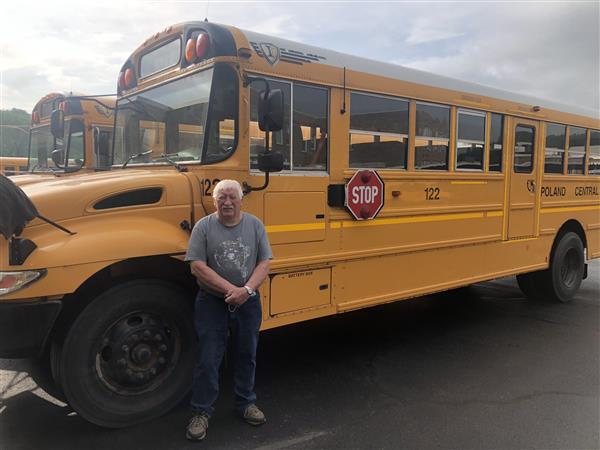 Poland Central School District bus driver Michael Miller poses next to a school bus on June 4. Miller’s last day of work before retirement is June 30, after about 20 years as a bus driver for the district.