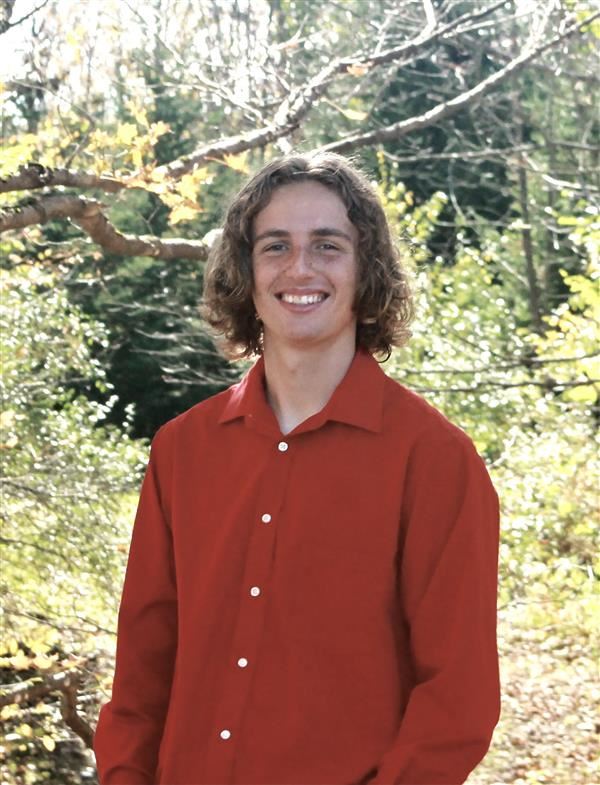 “It’s been a very busy summer so far,” he said.

“I want to be in a position where I can rally people together and get stuff done,” he said.

Draper, who plays soccer, baseball and basketball at Poland, said sports is what sparked his interest in leadership. Bringing those skills to other aspects of life such as school policies can make a true impact, he said.

“I think sports has really taught me a lot about leadership,” he said. “In sports, you see people step up and bring people together, so you can bring that more into the real world.”

Poland Principal Greg Cuthbertson, who is also Draper’s baseball coach, was an influence in Draper’s decisions to take on these opportunities.

These leadership roles should be very valuable for Draper – including the networking he has done through the Digital Equity Summit and Boys State and the information he’ll learn from Board of Education about functions, policies, procedures and the tone of meetings, Cuthbertson said. Draper also was one of the 2021 captains of the boys varsity basketball team, is a member of the National Honor Society, served in Student Council prior to pandemic restrictions on club activities and was elected by other students as class president in ninth, 10th and 11th grade.

“I’m proud of him,” Cuthbertson said. “I know he’s a hard-working kid. He’s going to put forth his best effort no matter what.”

Cuthbertson said he could tell from Draper’s actions on the baseball team and in the classroom that he would be a good representative of the school.

“He’s a team player,” Cuthbertson said. “He’s going to lead by example with his effort and his attitude.”

The statewide Digital Equity Summit took place virtually on June 15 with about 300 attendees including students, teachers, principals, superintendents, government officials and other leaders from across the state. The goal of the event was to allow decision-makers to hear directly from students about increasing digital equity for all New York state students and how their experiences with virtual learning went during COVID-19.

“Just so everybody can have the opportunity to learn equally,” he said. “If you don’t live in the right place or make as much money, you should still have the same equal access to education.”

After Cuthbertson received a call about the summit, he recommended it to Draper at baseball practice, and Draper decided to attend.

“The first person I thought of was Nathan,” Cuthbertson said. “We wanted someone who would be a good representative of Poland and would be able to express and articulate what they’re looking for.”

Draper experienced virtual learning at Poland in 2020 and had some Wi-Fi issues at times but was able to navigate those challenges and make it work, so he had good perspective to offer for the summit, Cuthbertson said.

The summit included breakout sessions where New York State Education Department officials heard directly from every student who attended. Students then submitted one thought about the topic, and all students voted on which thoughts they agreed the most with. The most popular opinions were then further discussed in front of the entire summit.

Draper submitted a comment that virtual learning results in no separation between home and school life, and that idea was one of the ones that received enough support to be a topic of discussion for the full conference.

“It was pretty cool to be able to represent our small, little school at a big, statewide conference,” Draper said.

After Draper played “Taps” at a local funeral, he was talking to American Legion members, and they recommended Boys State to him. He had heard good things about it and knew that Cuthbertson and many political leaders had gone to Boys State, so he decided to go for it.

“I thought it would help with leadership abilities and public speaking and things like that,” he said.

After going through the application and interview process, Draper was selected to attend, and American Legion Post 1118 in Cold Brook sponsored him and paid for his attendance.

Students were split into groups, and about half of the time was spent participating in mock elections – including writing speeches and campaigning – and the other half was spent doing the job you were elected to. Draper became a county legislator through the mock process.

“It was a lot of learning from the start,” he said. “It was very eye-opening for me about how the political process works.”

Cuthbertson said teacher recommendations about students such as their tendencies and interests from classroom discussions also play a role in decisions about selecting students for leadership opportunities.

“Just knowing what type of kid he is, I know he is interested in these types of things,” Cuthbertson said.

Cuthbertson also said Draper represents Poland well at larger events because he is, hard-working and smart.

“That’s what Poland is all about,” Cuthbertson said.

Since district residents voted 129-38 in May 2015 to add an ex-officio student member to the Board of Education, Cuthbertson recommends a senior each year for the role, and he selected Draper for the 2021-22 school year.

“I was super excited to do it,” Draper said.

The student board member attends all public board meetings and participates in all board hearings and meetings, but does not attend executive sessions or have a vote.

Cuthbertson said he talks to teachers including social studies teacher Tom Basel for help with making the decision on the student board member.

“When it came down to it, I thought he would be a good representative of the student body,” Cuthbertson said, of Draper. “Kids talk to him. He has a good pulse on the student body.”

Cuthbertson said he knew Draper would be honest, give his own opinions and do his best to represent the overall student body.

“It’s going to be great for us – not only for the student body, but for the board too,” Cuthbertson said.

As class president since ninth grade, Draper has regularly participated in meetings Cuthbertson holds with all of the Poland class presidents before Board of Education meetings.

“That kind of introduced me to the Board of Education process,” he said.

Draper attended his first Board of Education meeting as student member on July 13. He said Poland Superintendent Laura Dutton did a great job of explaining his role on the board and how he will get materials to review before board meetings.

He thinks it’s vital that students have a voice on the board.

“It’s super important,” he said. “Our board members are great and everything, but you need someone who’s actually affected by the policies that are put in place.”

Draper also wants to encourage students to go to him with issues or concerns.

Draper hopes his participation also helps the other board members because he can obtain feedback from students that will let board members know how their decisions are affecting students and use that information to assist them with future decisions.

Looking back at all of his recent opportunities, Draper said the connections he has made and the experiences he has had could help him throughout his life.

“I think they’ve been super valuable to me,” he said. “I’ve gotten to meet so many people over the past couple weeks of summer.” 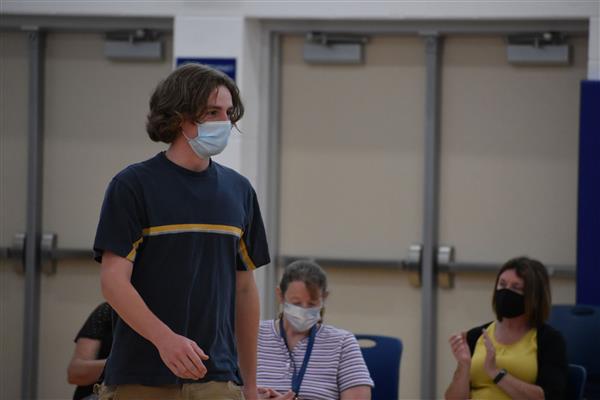 Poland Central School District student Nathan Draper walks up to receive an award during the High School Awards Ceremony on June 4. Since completing his junior year later in June, Draper has attended a virtual Boys State, participated in a New York State Education Department Digital Equity Summit and joined the Poland Board of Education. 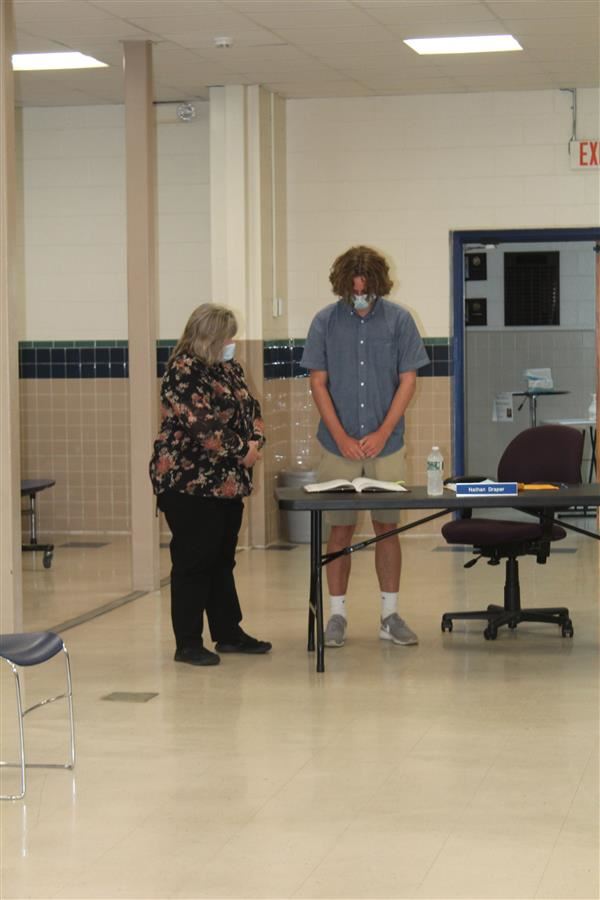 Poland Central School District student Nathan Draper is sworn in on July 13 as the student member on the Poland Board of Education by Board Clerk Donna Wellington. 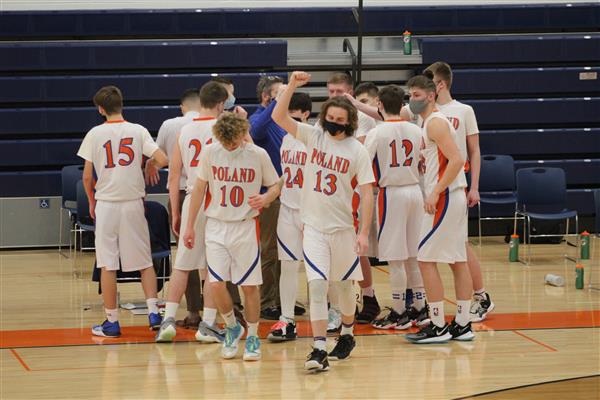