POLAND – Poland Central School District first-grade teachers made sure their students took some of the last day of school before Thanksgiving break to participate in some Thanksgiving traditions.

First-graders took an in-school trip to the movies to watch “A Charlie Brown Thanksgiving” in the school auditorium and paraded around the school hallways with balloons they decorated based on the Macy’s Thanksgiving Day Parade.

Despite the limitations due to COVID-19 restrictions, first-grade teachers Christina Kress, Kathleen Hess, Patricia Linneen and Sarah Barron were happy with the activities they were able to provide for students.

“We tried to make it as normal as possible, so the kids could still have fun and enjoy the traditions we would have in a regular school year,” Kress said.

First-graders read a book called “Balloons over Broadway: The True Story of the Puppeteer of Macy's Parade” and read about traditions in “Scholastic News,” so the Thanksgiving movie and parade they participated in were an extension of those topics they learned in class.

Kress said she and Barron wanted to help start some traditions with the Thanksgiving activities during their first year as first-grade teachers.

“Being new to first grade, we wanted to come up with some new ideas to do some different things,” Kress said.

Barron said the idea to watch “A Charlie Brown Thanksgiving” came from her personal tradition of watching it each year.

“It’s nice to bring them some of these traditions at school,” Barron said.

Along with watching “A Charlie Brown Thanksgiving,” students ate the same food the characters in the film have for their feast: toast, jellybeans, pretzels and popcorn.

For the parade, students designed and decorated their own balloons, which were filled with helium and floated along as students carried them down hallways for other students and teachers to see. Students also made Snoopy hats, which tied into both “A Charlie Brown Thanksgiving” and the Snoopy float from the Macy’s Thanksgiving Day Parade.

Even with following COVID-19 guidelines, there were still ways to give the students a memorable experience, Barron said.

“They’re still able to have a fun day,” she said.

Hess said the activities were a great opportunity to have some joint experiences among all of the first-graders.

“It was nice for everyone to be together,” Hess said.

The students enjoyed creating their balloons, participating in the parade and showing what they made, Hess said.

“They were really proud of it,” she said.

Linneen said students learned about Native Americans, Pilgrims, the history of Thanksgiving, the Macy’s Thanksgiving Day Parade and more. Connecting that learning to fun activities is especially important for students the age of first-graders, she said.

“It keeps them engaged, and they are way more likely to remember the history of the parade and Thanksgiving if you make it fun,” Linneen said, noting that it can be hard to keep first-graders focused. “So if it’s fun and involves balloons and putting stickers and designs on balloons, then they’re all about it.” 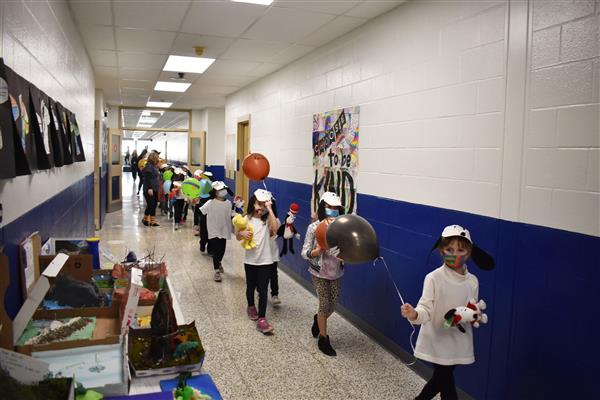