POLAND – Band students stood spread out from each other on the new gymnasium floor, and choir students did the same in the bleachers, as audience members looked on while wearing masks.

It wasn’t a typical concert scene, but nonetheless, the music was back.

“We tried to get back to as normal as possible,” Brown said. “It was the first concert in close to two years. The kids were excited. I was excited. You could feel it.”

The Poland general music classes have had to adapt through COVID-19 regulations, and band and choir classes were put on hold for an entire school year, so the path back to putting on the 2021 Winter Concert came with challenges.

“It felt good to get students singing; to get them showing off what they have worked on,” Kraeger said.

At the Winter Concert, the family and community members in the audience seemed attentive and engaged throughout the performance, Brown said.

“It was the quietest audience I’ve ever had here,” he said. “I think they were ready for something like this to happen too.”

The last times the school bands and choirs performed were for the 2019 Winter Concert and then at a Utica Comets game on a Friday night before the holiday break in December 2019, Brown said.

Not having an opportunity to perform since then made the return feel more special, Brown said.

“It was nice and refreshing to have the kids want to play,” he said. “The kids seemed different. They seemed like they wanted it.”

The atmosphere affected Brown too.

“I was nervous mainly because we hadn’t played a concert in so long,” he said.

For Kraeger, it was also her first concert at Poland.

It felt strange for her to be in a different venue with a different setup and crowd than she was used to from her previous job, she said. There was a lot of nervousness among students – particularly younger students – with the return to putting on a concert, but the preparation paid off, she said.

“The concert went much better than I anticipated,” Kraeger said.

Kraeger started working at Poland Central School District on Sept. 21, after fulfilling her required 30-day notice with Utica City School District, where she worked as a music teacher for the past 13 years.

It would have been nice to start with Poland at the same time as school started for students, but the delay did give Kraeger the opportunity to say goodbye to her Utica students and gave Poland students a chance to get used to the idea that their former music teacher, Jocelyn Rauch, had left the district, Kraeger said.

“It wasn’t ideal, but there were blessings in it,” Kraeger said, of starting on Sept. 21.

Kraeger is a graduate of Holland Patent Central School District. She then went to college at the Word of Life Bible Institute for two years. Next, she earned her music education degree from Baptist Bible Seminary, which is now known as Clarks Summit University.

Around February 2006, Kraeger started doing per diem substitute teaching at Poland and continued to be a substitute at Poland and Holland Patent through June 2008, before starting at Utica.

“It’s interesting to be on the other side of it now,” she said, of being a full-time teacher at Poland.

Kraeger said she decided to become a music teacher because of her own interest in music.

“I was a musician myself – singing and playing piano and violin – so when I had to pick something that would work for a job, music education just made sense,” she said.

Some of Kraeger’s earliest memories are of singing in the choir pews at church, so her interest in music came naturally.

“I think I just liked it,” she said, “and my family nurtured that.”

Her grandmother put her into piano lessons at the end of first grade, and she started playing violin in third grade.

Those beginnings led to where she is now, teaching general music to students in kindergarten through sixth grade and leading the vocal music program.

In March 2020, when schools closed to in-person learning due to COVID-19, Brown maintained a presence with students virtually and had discussions about music. About three weeks into it, he went into school and sent instruments home to students, and he was able to conduct individual, virtual lessons with students.

For the 2020-21 school year, in-person learning returned at Poland, but band classes weren’t able to be held.

“It was absolutely no band,” Brown said. “General music and study hall is what we did.”

It’s good to be back closer to normal with general music classes this school year and to be back to teaching instruments and band, Brown said.

Kraeger said she is happy to be teaching general music this year in a music classroom. She said it’s great that Poland had in-person classes for the full 2020-21 school year because at Utica, she didn’t return to in-person teaching until March 8, 2021, almost a full year after the pandemic first affected schools.

After virtual teaching, hybrid teaching and visiting other classrooms, Kraeger said she’s happy to have students visiting the music classroom this year at Poland.

“It’s so much nicer because students can come into the room and use the music equipment and instruments,” she said. “I’m very much a fan of hands-on education.”

‘They came a long way’

From going through the past 21 months of COVID-19 regulations and starting with a new teacher, choir students faced an uphill battle to get ready for the 2021 Winter Concert.

In order to sing with masks off, students have to stand 6 feet apart, but when spaced out, students felt like they were singing by themselves, Kraeger said.

“Preparing for the concert, it was challenging to figure out how to sing spaced out and be OK with it,” Kraeger said. “It took a while for us all to feel comfortable enough with each other to sing out.”

Rehearsing in the new gymnasium added an extra element of having to fill a very large space with their sound. At one point, Kraeger had to ask students to put their masks back on and stand a little bit closer together so they could get on the same page with their sound, before spreading back out again.

The process forced some thinking outside of the box about what a choir rehearsal should be like, and there was a lot of changing, growing and learning involved – leading to a strong concert performance, Kraeger said.

“They surprised me,” she said. “They came a long way, they really did, and I feel like I did too.”

Coming off of a year without band, and for some other reasons, the bands got off to a slow start as well, Brown said. For band preparation, the biggest change with COVID-19, is just the setup of how to practice and play.

Brown now looks at band rehearsals like practicing for marching band outside – with students standing in front of music stands in semi-circles around him, he said.

When things got going again with band, the students were into it, Brown said. He wanted to make sure students had an opportunity to play live this school year, so the bands would have used other methods such as live-streamed performance if they needed to, he said.

“The main thing I was really concerned with was to perform again,” he said. “We put on a good concert. They stepped up.”

The concert preparation was more difficult than normal, but it turned out well, Brown said.

“I’m happy that we did it,” he said. “I think the kids and the community were better for it.”

At Poland, students are normally introduced to instruments by learning to play a recorder in third grade. Then, they try out various instruments in fourth grade and are encouraged to receive lessons and participate in band with instruments they show potential with, Brown said. Students typically have the choice of what instrument to pick, he said.

But through COVID-19 and no band last school year, some of those steps were skipped. This year’s sixth-graders only had a partial year of band in 2019-20, and this year’s fifth-graders and fourth-graders haven’t had any band yet.

The district and music department seek to return to the introduction of recorders to elementary students as quickly as learning constraints allow. If band is going to fully return for those grades in the second half of the 2021-22 school year, it will be a unique challenge, Brown said.

“I’ve got my work cut out for me to basically get band started with three grade levels this year,” he said.

Brown isn’t sure if the younger students would be able to have a concert or not if band and choir return for them this school year, but he would look into recital and performance options if possible. Many schools are in similar situations of trying to build back their band and choir numbers, he said.

For the older students, spring performances are next on the schedule, and other opportunities for students to perform will be explored. Students have not had as many experiences performing. In past years, the music groups provided concerts at Unity Hall in Barneveld, the Masonic Lodge in Newport, the Sherburne Pageant of the Bands and at Utica Comets games. Brown would like to see all those experiences return.

Kraeger also supports additional performances for students, and she is ready to embrace learning and growing experiences that the current safety protocols allow.

“We’ll just see,” she said. “Flexibility is key these days, as well as having an open mind and thinking outside the box.” 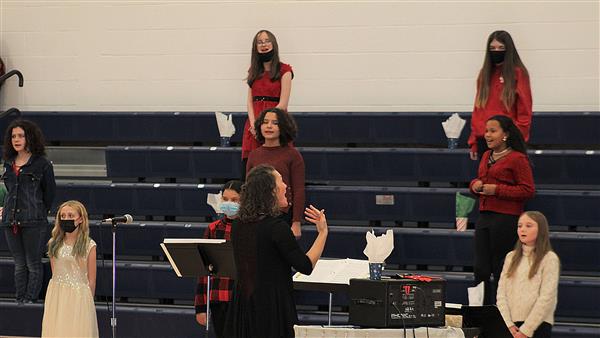 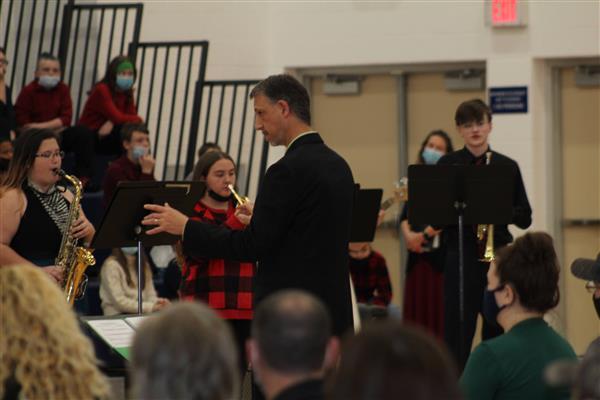 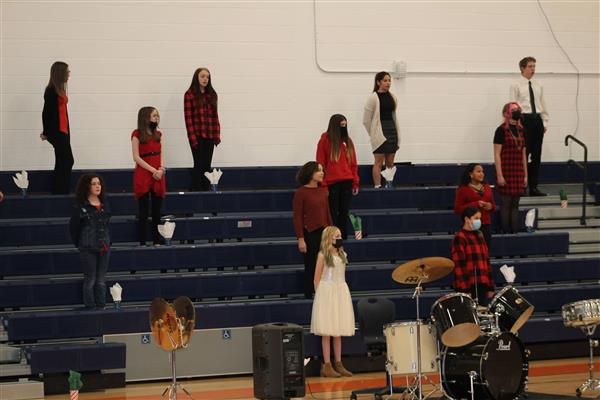