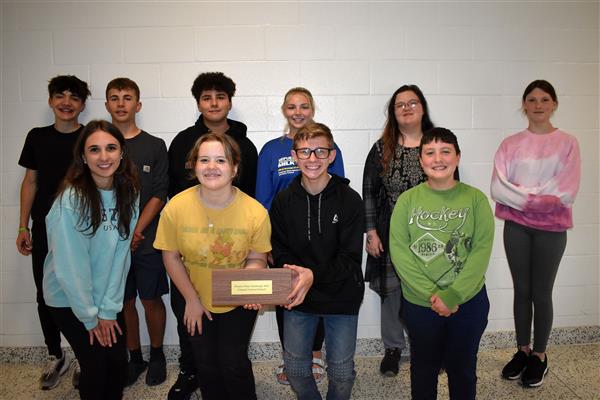 POLAND – The Poland Central School District Science Club led the school community in an effort that resulted in the collection of 356 pounds of plastic film for recycling.

Students and staff brought in plastic film for the effort – with elementary students contributing the most – and community members dropped off large bags of plastic film, said Jessica Meyer, Poland science teacher and Science Club advisor.

“One of the things we want to do as the Science Club is make a difference in the community,” Meyer said. “This definitely did a great job of trying to involve the community and doing something great for the environment at the same time.”

The Poland Science Club collected the plastic film as part of the Oneida-Herkimer Solid Waste Authority’s 2022 Plastic Film Recycling Challenge. Poland placed fourth out of the 14 school districts in Herkimer and Oneida counties to participate in the event and received a plaque. The standings were based on the total weight of plastic film collected, adjusted for the number of students in each district.

Meyer said she was introduced to the need to separate recyclable plastic film when now-retired Poland special education teacher Sally Lahey used to organize plastic film challenges with the Poland Kids Against Pollution, Poverty and Prejudice club, and her children contributed to the effort.

The Science Club is now picking up the initiative to get the information out to others that plastic film can't be put into a recycling bin with other recyclable items but must instead be returned to locations such as grocery stores that take plastic film.

“The big thing about the plastic film is that it can be recycled, but you can’t put it in the plastic bins,” Meyer said.

Having a competition at school also makes it easier for families in the school community to recycle their plastic film, Meyer said.

“It gives them another option,” she said. “I think it’s easier to remember to send it with your kids to school.”

Science Club members also recently were able to take a trip on Saturday, June 4, to Mountain Ridge Adventure in Schenectady. The Science Club brought bagged lunches and took a bus, and they were able to try high ropes and the zip line course.