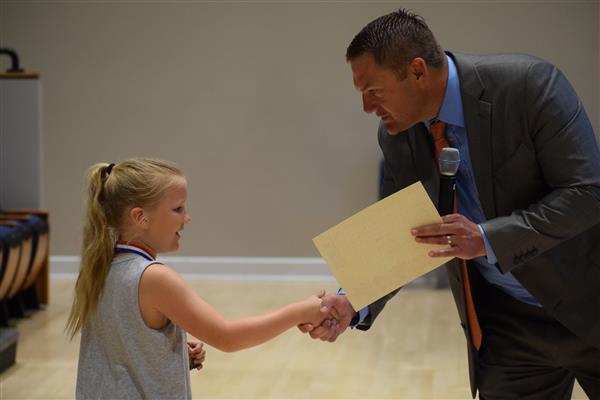 POLAND – During the last PPP Assemblies of the school year, Poland Central School District Principal Greg Cuthbertson encouraged students to continue learning over the summer by remembering to pick up a book or practice math facts.

The PPP Assemblies, which honor elementary students with awards that connect to the school motto of “prepared, productive and proud,” took place on Wednesday, June 22. One assembly was held for kindergarten through second grade, and another one was held for third grade through fifth grade.

During the second assembly, Cuthbertson spoke specifically to fifth-graders.

“I hope that when you get to middle school, you will remember these assemblies,” he said.

Cuthbertson said the PPP Assemblies are about building character, and the fifth-graders will have more independence next school year while in middle school.

“I like to say your character is what you do when people aren’t watching you,” he said.

Cuthbertson also repeated his message from the first assembly about the importance of not only having a safe, fun summer but also continuing to learn.

“It’s only going to help you when you come back in the fall,” he said.

Students won several special awards that aren’t normally given out at every PPP Assembly:

Eye of the Tornado Awards:

Eye of the Tornado Awards were presented to students who have done something above and beyond that a staff member witnessed:

Safe Rider Awards were given to students for good behavior while riding the bus:

Safe Walker Awards were given to students for good behavior walking to and from school:

Students received Star Awards for mathematics and English language arts – either for achieving the highest scores or for showing improvement:

Behavior during lunchtime, while in the hallway and when attending classes taught by other teachers is recognized with homeroom awards. The class receiving the Golden Spatula Award for lunchtime behavior gets to keep a golden spatula until the next PPP Assembly.

The winning class awards are listed below: