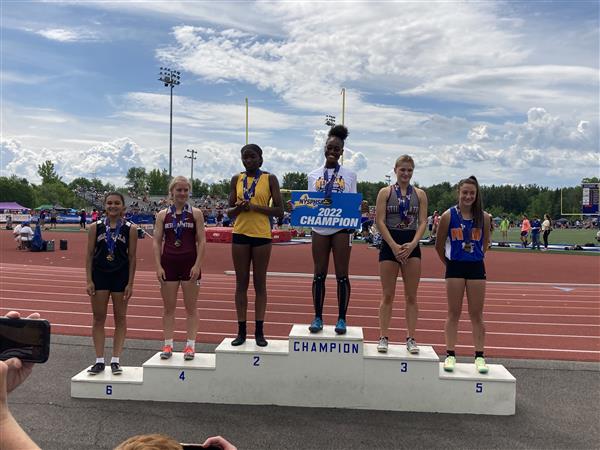 Poland Central School District ninth-grader Maddison Haver (on the right) stands on the podium with her fifth-place medal from the 100-meter dash state championship competition.

On top of all that, the boys’ league championship and the girls’ sectional championship came down to one race – making the experience even more unforgettable.

“It was a great season, and depending on how you look at it: our best season,” Joel Allen said. “We had team success, individual success and really close competitions that were thrilling and exciting. You can’t ask for much more than that.”

This was the first time the Poland boys varsity track team won the league championship. It was the third time the girls team won both the league and sectional championships – marking three championship seasons out of the last five years – despite not having the opportunity to compete in 2020 due to COVID-19 and having a small team in 2021.

“It was the most successful season we’ve had, with two teams winning the league championship, one team winning sectionals, one athlete placing fifth at the state championship – all in the same year,” John Allen said. “And I think getting the modified team was important to us to give those 10 kids a chance to participate, get a chance to try track and field, and I think most of them probably will continue.”

The Poland boys varsity track team never won a league title before scoring 155 points and winning the Center State Conference Division 4 league championship meet on May 17 this year. It was a big jump from their previous league meet point totals of 36 in 2018, 52 in 2019 and 19 in 2021. There was no league meet in 2020.

That history made this year’s competitive league meet even more exciting for the boys on the team – especially when it came down to the final race: a four by 400 meter relay race ran by Gage Smith, Aaron Pope, Zach Gee and Forest Martin. Poland entered the race ahead by a few points.

“We knew if we won that race, we were league champions,” Joel Allen said. “In that four-by-four, when those boys were running, all of the kids who weren’t running and the girls team were just going crazy, running back and forth across the track and encouraging them, so it was fun to see the kids so into it.”

Poland won the race and the league championship. For the boys to win their first championship in such dramatic fashion – with both the boys and girls teams cheering on the runners – was very memorable, John Allen said.

“It was exciting,” John Allen said. “It’s never been exciting quite like that. For either team, it’s never come down to that. We’ve seen it at championship meets with other teams, but we never got to experience it on our own.”

‘If it can get more exciting’

The Poland girls varsity track team won the league and sectional championship this year for the third time out of the last four possible years – due to COVID-19 causing the stoppage of sports in spring 2020, a year when the team would have been really good. The effects lasted into 2021, when Poland only had nine girls on the team and still finished second to Remsen in the league championship.

This year, Poland returned to the success of 2018 and 2019 by winning both the league and section again – but this time it was in more dramatic fashion.

Poland closely trailed Oriskany on May 27 heading into the final event of the Section 3 championship meet: an 800-meter race that was the last leg of the pentathlon. Poland ninth-grader Zyanna Irving-Summers was in first place heading into the race, but the pressure was on ninth-grader Kendra Houghtaling, who was in fourth and had the opportunity to move up in the scoring with a good time because an Oriskany student was just ahead of her in third place.

Houghtaling, who had never participated in the pentathlon before that day, was cornered by her teammates, and they encouraged her to put her all into the 800-meter, the coaches said.

“She ended up winning the 800 meters, and that gave her enough points to flip-flop with the girl from Oriskany, so instead of losing by one point, we won by one,” Joel Allen said.

Irving-Summers won the pentathlon overall, and Houghtaling finished third – gaining enough points from her time in the 800-meter to pass the Oriskany student. Houghtaling came through with her best race when it mattered most, the coaches said.

“It was something she had run before, but never that fast – she was probably 20 to 25 seconds faster than she had ever run it,” John Allen said.

It was an incredible to have such a close finish shortly after the boys won the league championship in a big race too, John Allen said.

“That was our first experience with a singular race being so important at the end of the meet, and then we got an even more intense experience at sectionals with the girls because it was such a closer margin – one place either way and we would have lost by one point,” John Allen said. “That was something that we’ve heard about and kind of seen from afar but never something that we experienced up close. It made it fun. It made winning more exciting – if it can get more exciting.”

On to the state championships

“She really improved a lot in the end of the season – from the league championship to the state qualifier, her times kept getting better,” Joel Allen said.

Haver had the 13th fastest time going into the state championship and exceeded her ranking by finishing fifth.

“She outperformed her seed, she ran the fastest that weekend she’d ever run and it was only her ninth meet, so that’s a good sign,” John Allen said. “I hope she sticks with it.”

Just making it to the state championship meet is a huge accomplishment on its own, and Haver has the potential to get back there again, Joel Allen said.

“It was her first year, so she’s still learning and still getting stronger,” Joel Allen said.

For John Allen, who has been coaching the track program for about 10 years including the years that Poland had to use West Canada Valley’s track or run in the school hallways until a track was built as part of Capital Project 2020, seeing Haver receive a fifth-place medal on the state championship podium was a big moment.

“It was cool to see somebody up on the podium – you know, something I never would have fathomed the first few years I coached when we didn’t have a track, we had limited numbers – the competition was so good that I didn’t think we could ever even win a team championship let alone have somebody go on to the state championship,” John Allen said.

It could be hard to top this track season, but the coaches are focused on maintaining a high level of success and providing students with the chance to be successful.

“I think everything’s moving in a very positive direction,” Joel Allen said. “It was a great season – to have a modified program, to have all those individual successes, to have the team success – you can’t really ask for much more. To have close races, excitement. So we’re hoping we can just keep it going.”

The modified program had a good start this school year, and the coaches are excited that it gives students in seventh and eighth grade a chance to compete. The modified program also gave older students a chance to do some coaching and sharing of their experience with younger students, John Allen said. Varsity track athletes helped out with measuring and other work during the two home modified meets, and the coaches received much praise from the other teams and parents of athletes from other teams about what a great job the students did helping out, he said.

As far as looking ahead at the end of a highly successful season, John Allen said it all comes down to one word: consistency.

“It’s always been really for me – success in building is the consistency – like consistently being in contention with our team,” John Allen said. “With the girls, even before we had a track, before we ever won, we’d always be in the top two or three – so just consistently having a chance I think is the goal each year. Every year it’s a new batch of kids, and we want to have the opportunity to be a champion.”

The following are lists of individual student success in track this school year – including championships, accomplishments and school records:

Students who advanced to the state qualifier meet: 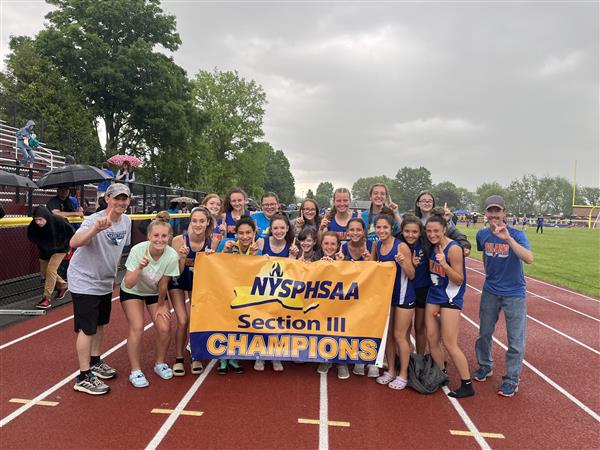 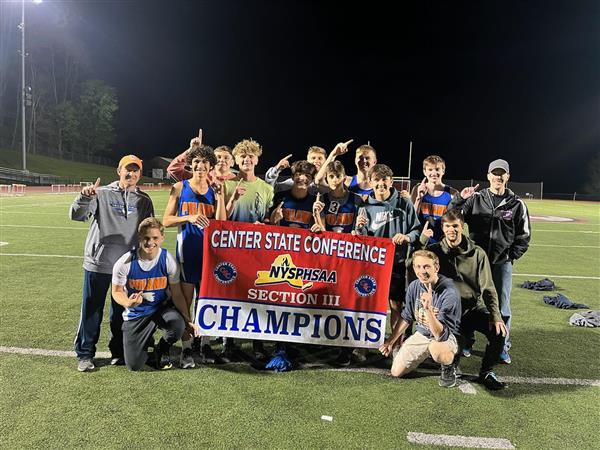 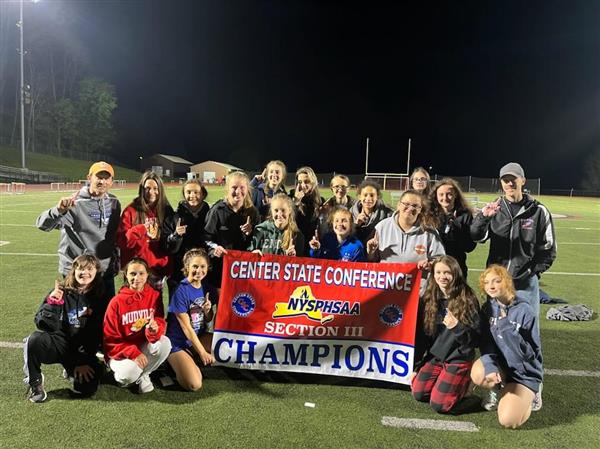 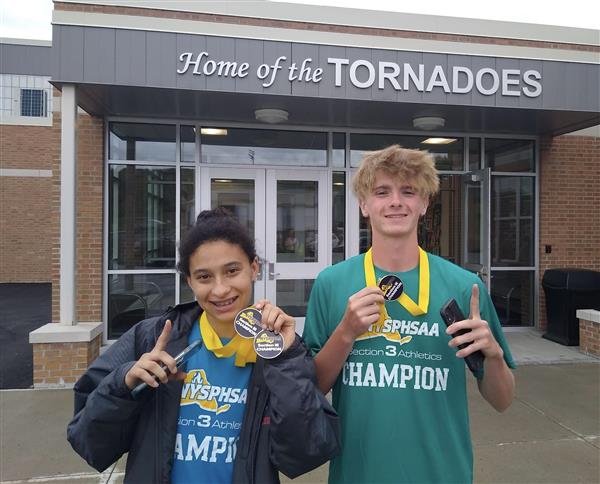